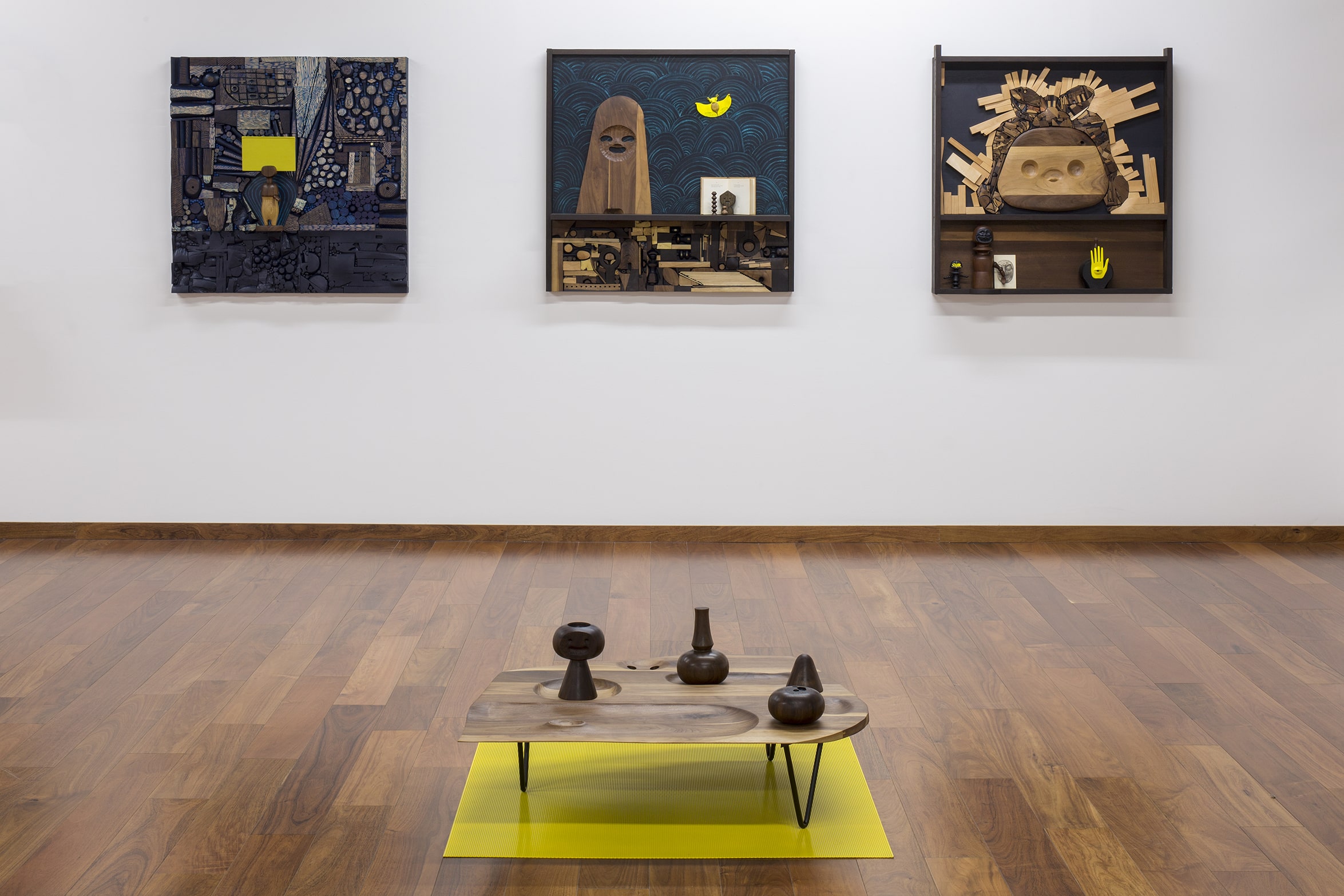 Presented to our gaze like strange animals, we know nothing of the internal life of the hands, other than that latent in them there is an ancient territory, which is another way of naming thought: in the span between one dream and another, the tentacled creatures attached to the ends of our arms provide a model for language, giving unfinished form to our passage across the face of the earth.

Their place as the creative force of our species puts them in an ambiguous position: they are instruments in themselves, makers of objects that unfold at the moment when touch becomes caress. "I grasp the sign made by a hand and see that there is a freedom in my desire", wrote Jorge Cuesta, and one senses that full meaning of this statement is revealed when we are recognized by the thickness of matter.

This exhibition by Edgar Orlaineta, one of the few contemporary artists with a recognizable and therefore universal intimate language —something that recalls the dawn of the species at the moment of daybreak, vestiges of parallel civilizations that resemble oriental archetypes, rotund Venuses, scripts of rhythm and cadence: those first volumetric traces from when words were borne in people's arms— is unique on several count, not least of which being that he has returned to painting after years, even decades spent developing the recognizable modernist biomorphic forms that have provided him with the fingerprints by which we move through the wastelands of his oeuvre, which unfolds less like a corpus and more like a galaxy: Orlaineta's sculptures have no other functionality than to put the very idea of function in check, freeing objects from the tyranny of meaning in order to offer them up, infinite, in their softness as potentiality.

Clearly indebted to the Bauhaus School, his work calls the limits between the artisan and the artist into doubt, such that what one feels are thought processes embodied in design, affecting the framework of the world and social interactions. A master of transfigurations, he articulates elements to affect the way we perceive and understand our surroundings, given that the wall on which we read, the clothes we wear and the entire world we inhabit are forms of dialogue —albeit sometimes at war and almost always impossible— with the inescapable modality of visuality.

The works presented here —smiling like Totonac heads, zoomorphic like bats flitting through a picture, fossilized like ichthyologic reliefs that fled from the ocean— reveal a knowledge of but also an intimate contact with manual trades, where what takes precedence over figure and ground is the sensuous matter that transforms intuition into a language: the limits of his world, between lightness and grace, are the elements of a syntax that gets resolved in the mutual recognition of others: an active, materialist conscience, Orlaineta's mestizo archetypes remind us that human beings think because we have hands.

Robust and varied though the show is, perhaps it is the resplendence of wood that best expresses the ductile and flexible condition of his handiwork; whether carved, burned or twisted, there is nothing like wood subjected to the hand. Cognizant of the primitive force with which humankind's first effigies, mortars, pestles, and surfaces were made, rather than prophesying a civilization to come or coldly soliloquizing on the grammar of his art, Orlaineta arranges his compositions in symphony with the Orient and silence in the manner of Tanizaki's In Praise of Shadows, as well as with the strange contemporary pagan retables: with the boxes as elegies to Joseph Cornell and the wooden collages of Luis Wells, signaling that nothing is expendable and that there is no outside for a work that is all movement, interiority and suggestion.

In the manner of hands that speak without clarification from the mouth, Orlaineta's creations and their language are like the delicate shadow of a sound. 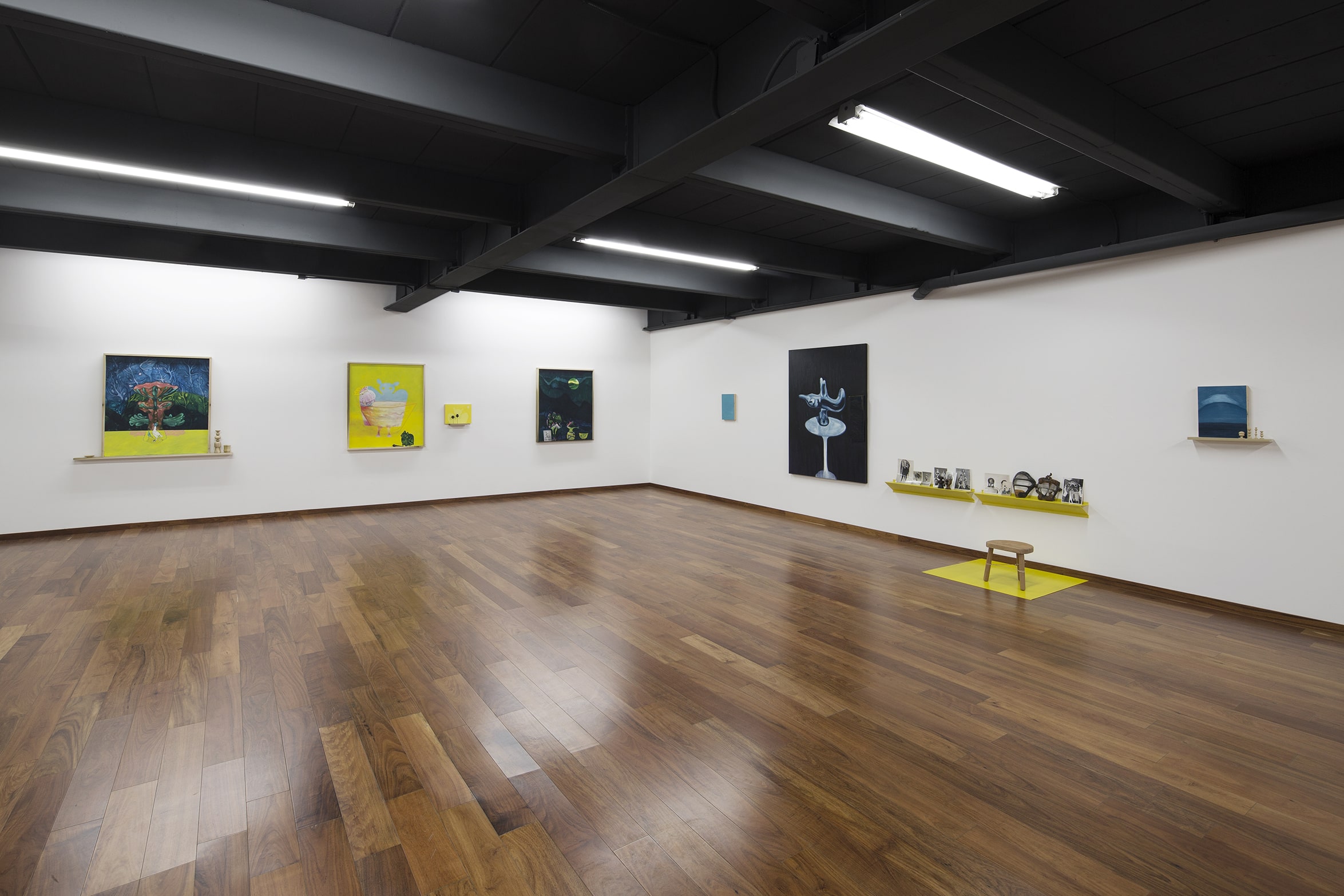 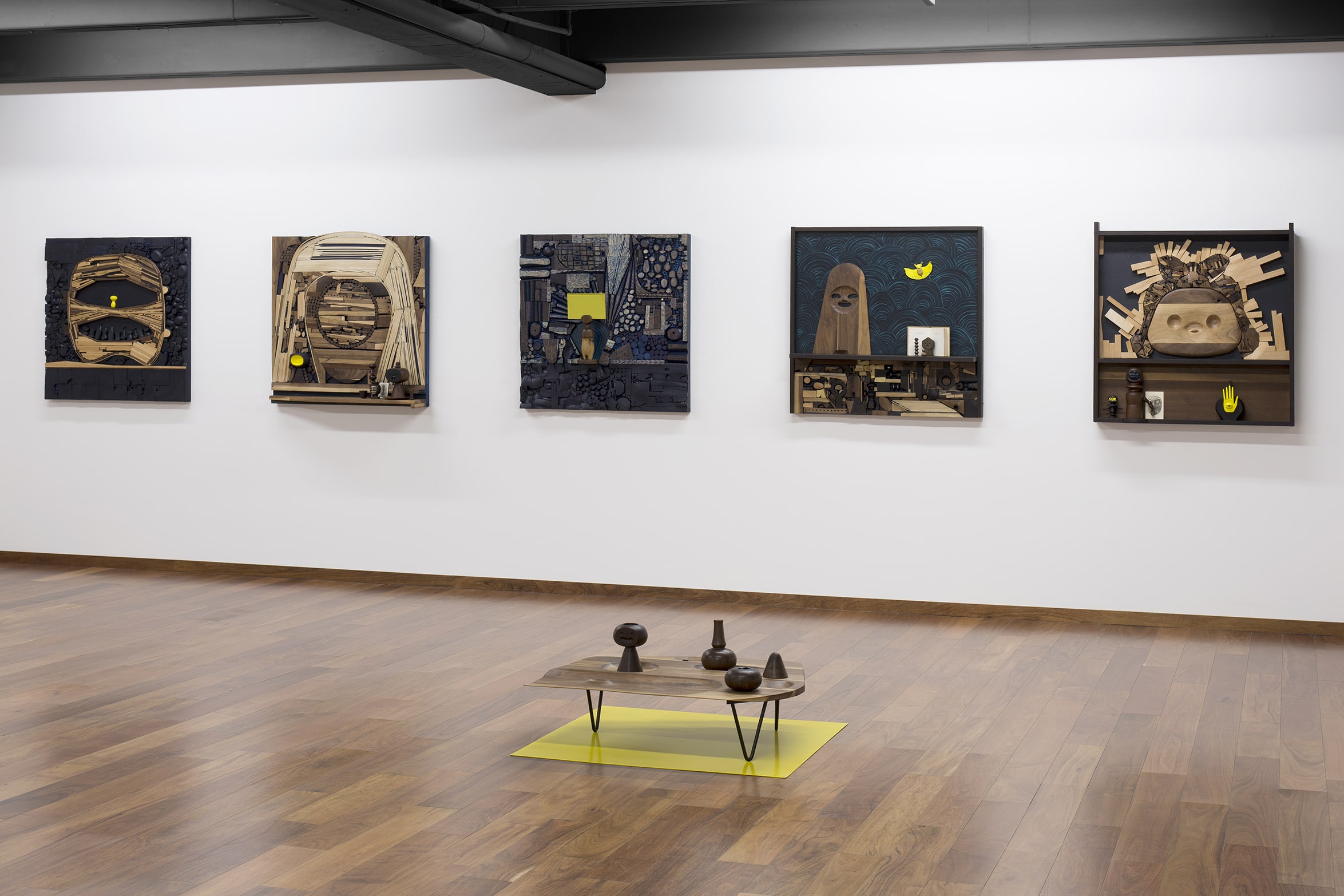 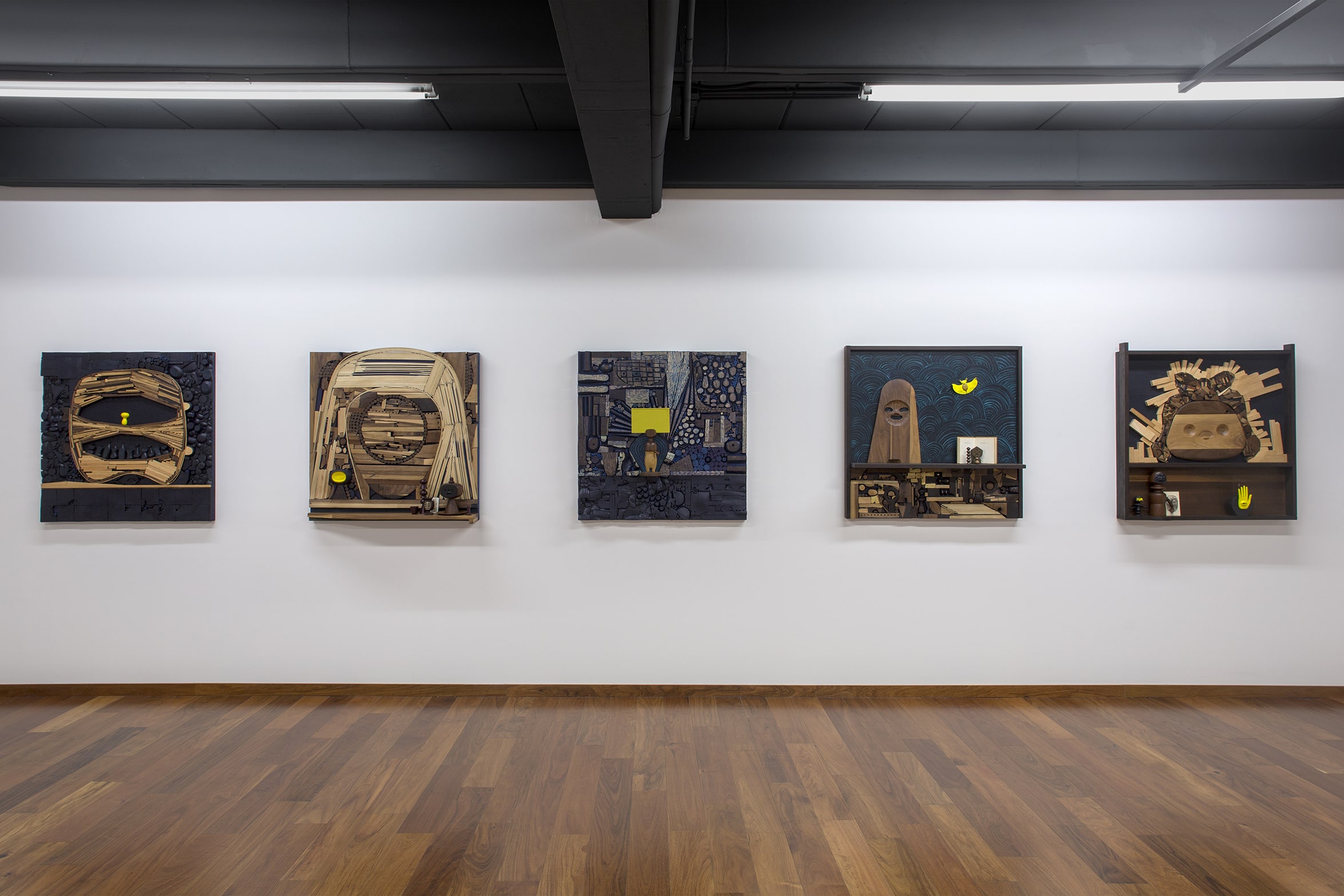 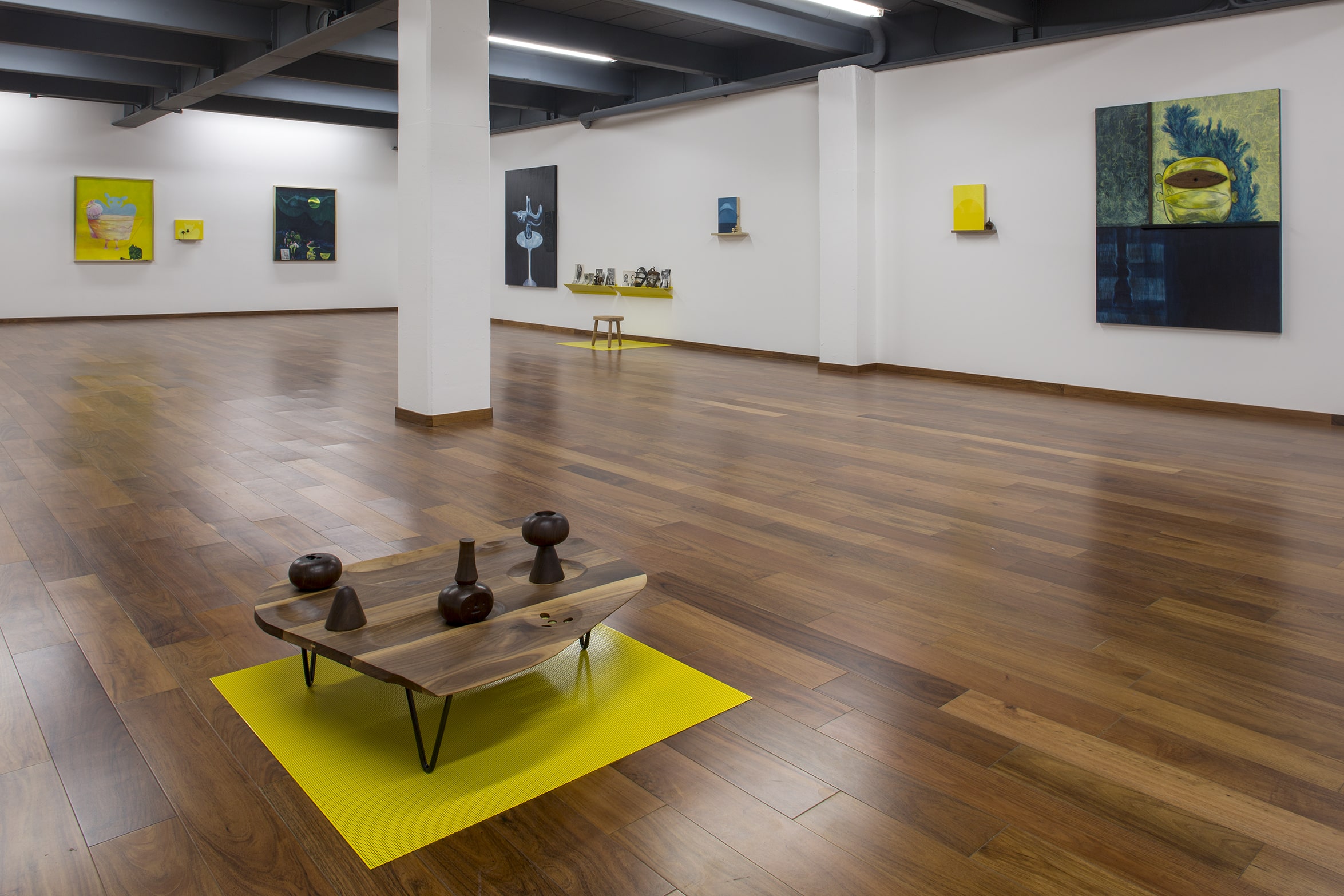 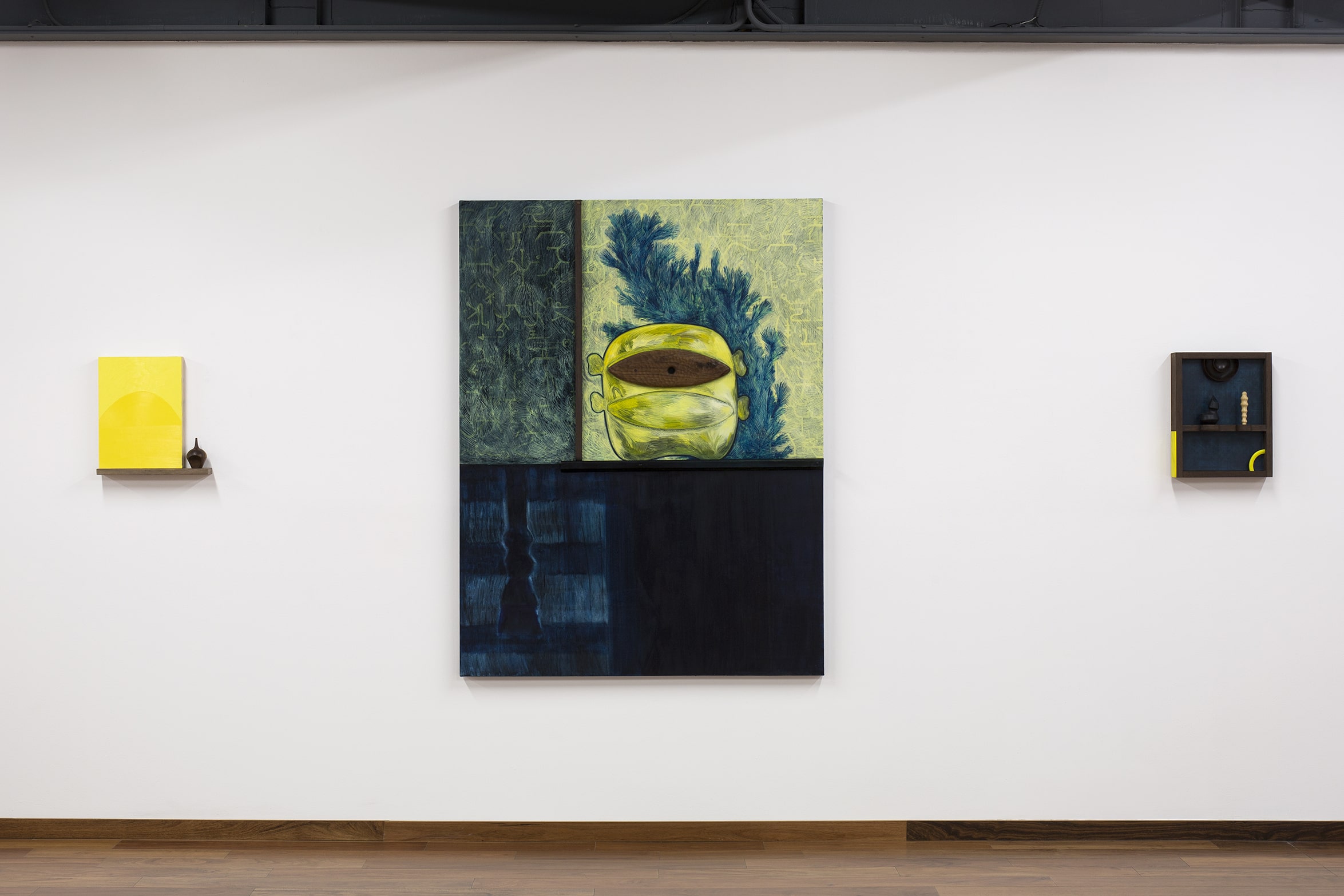 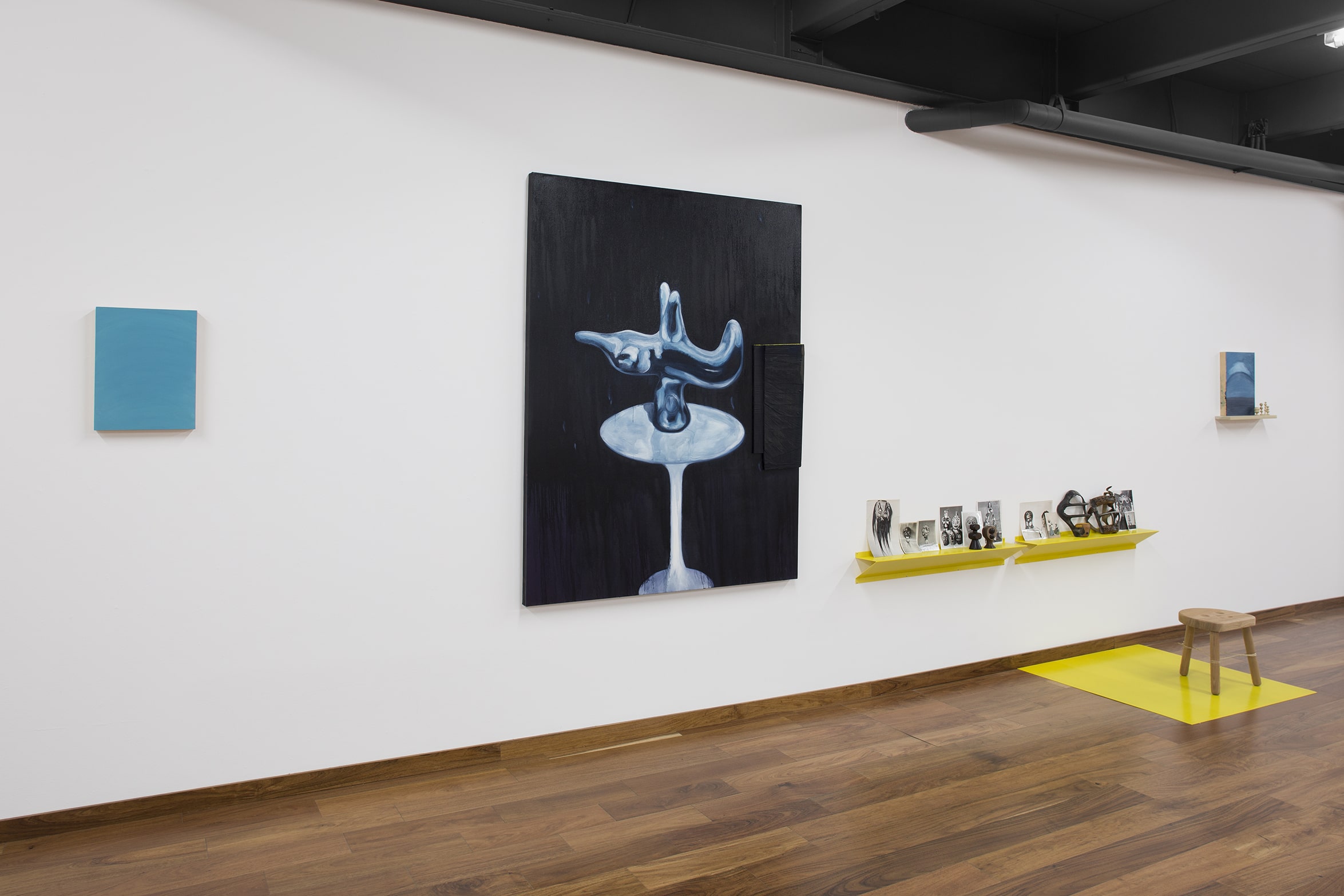 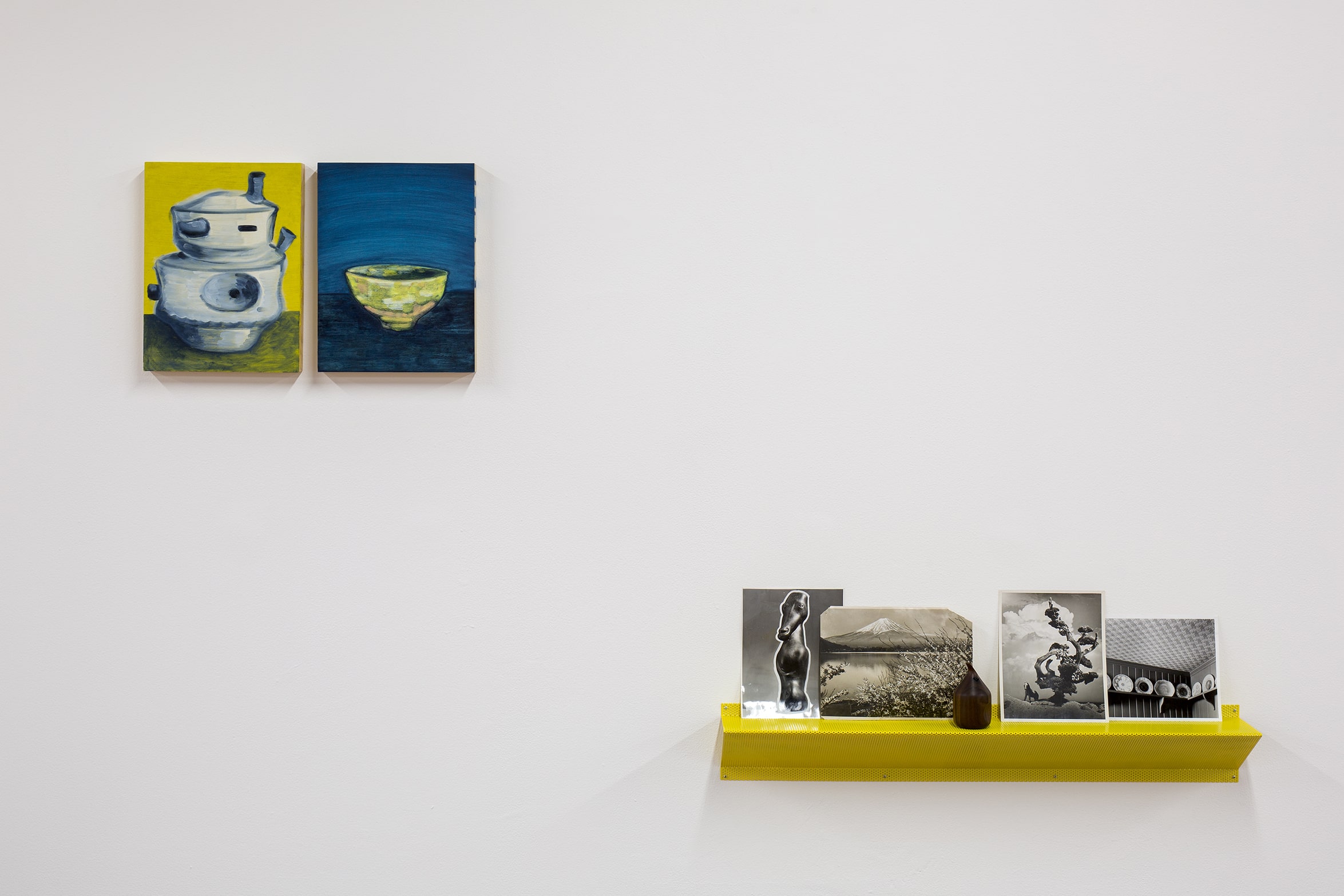 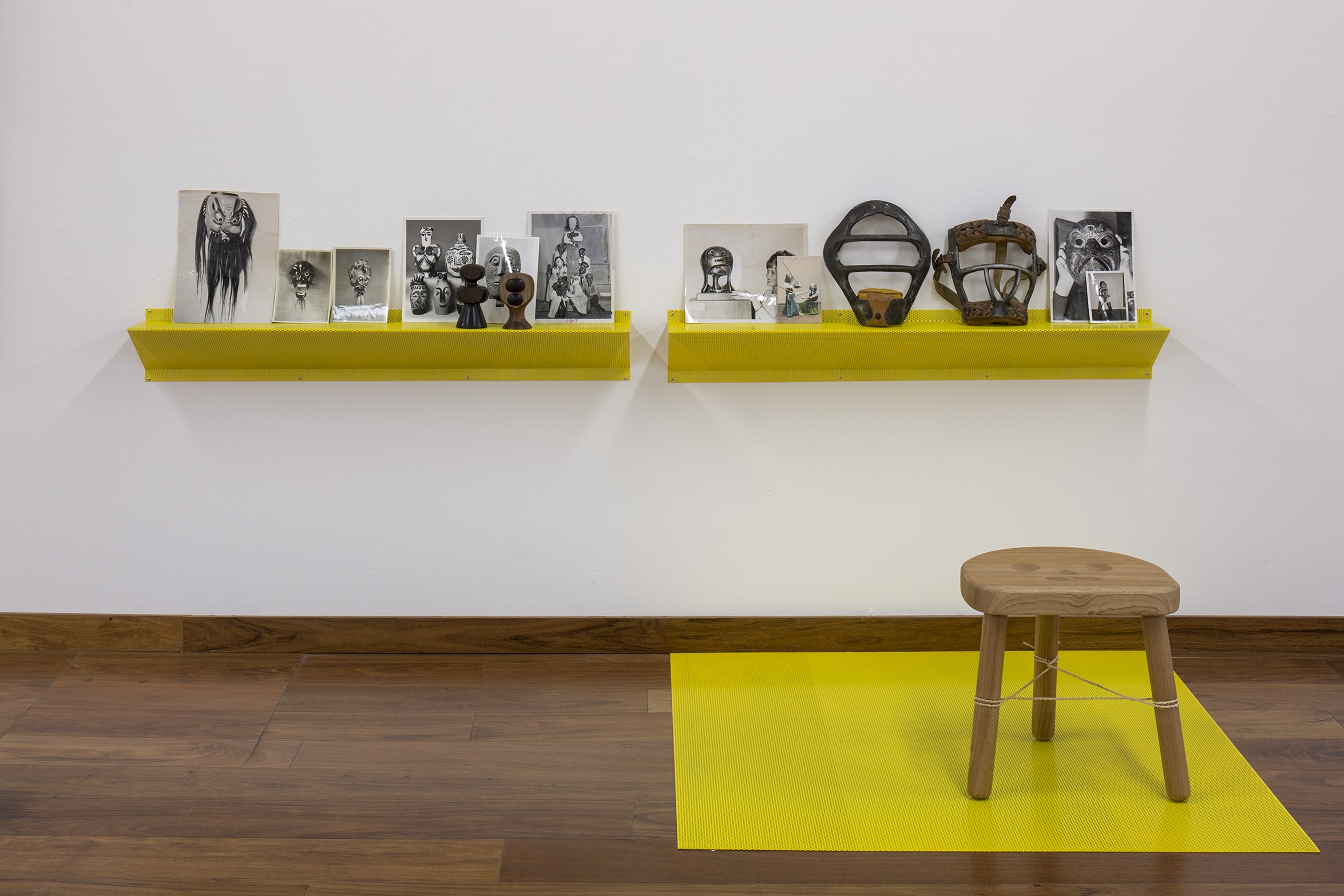 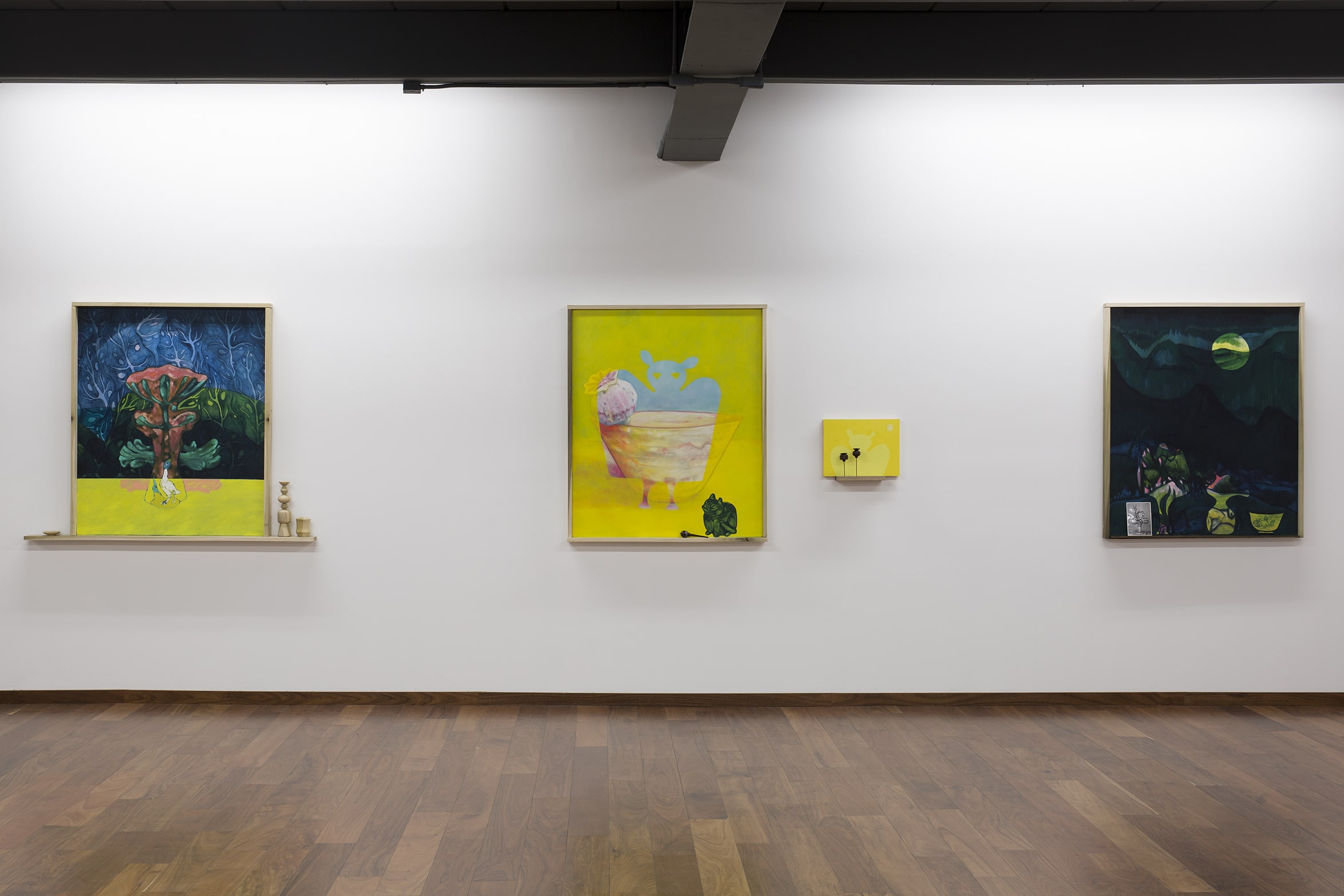 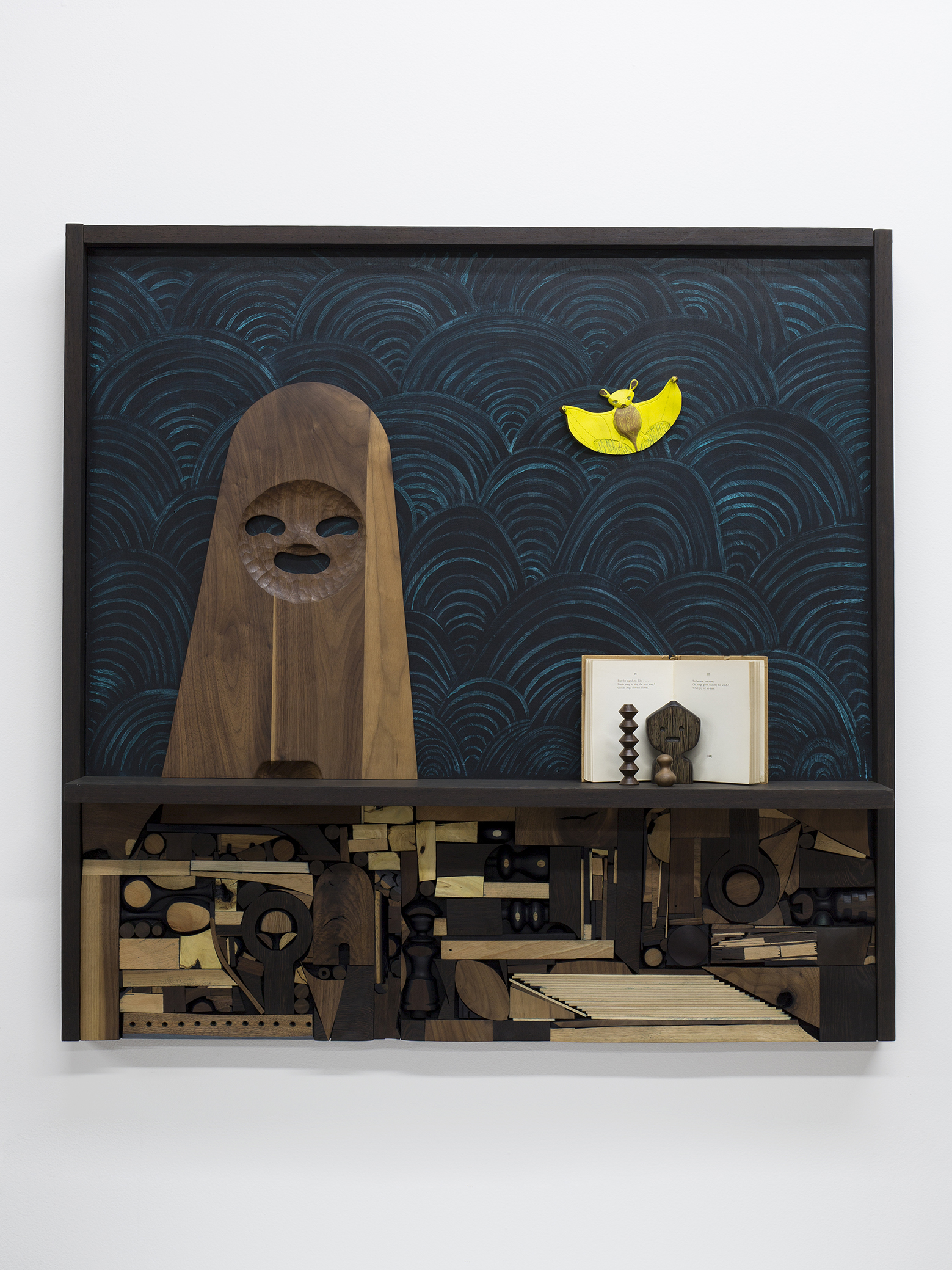 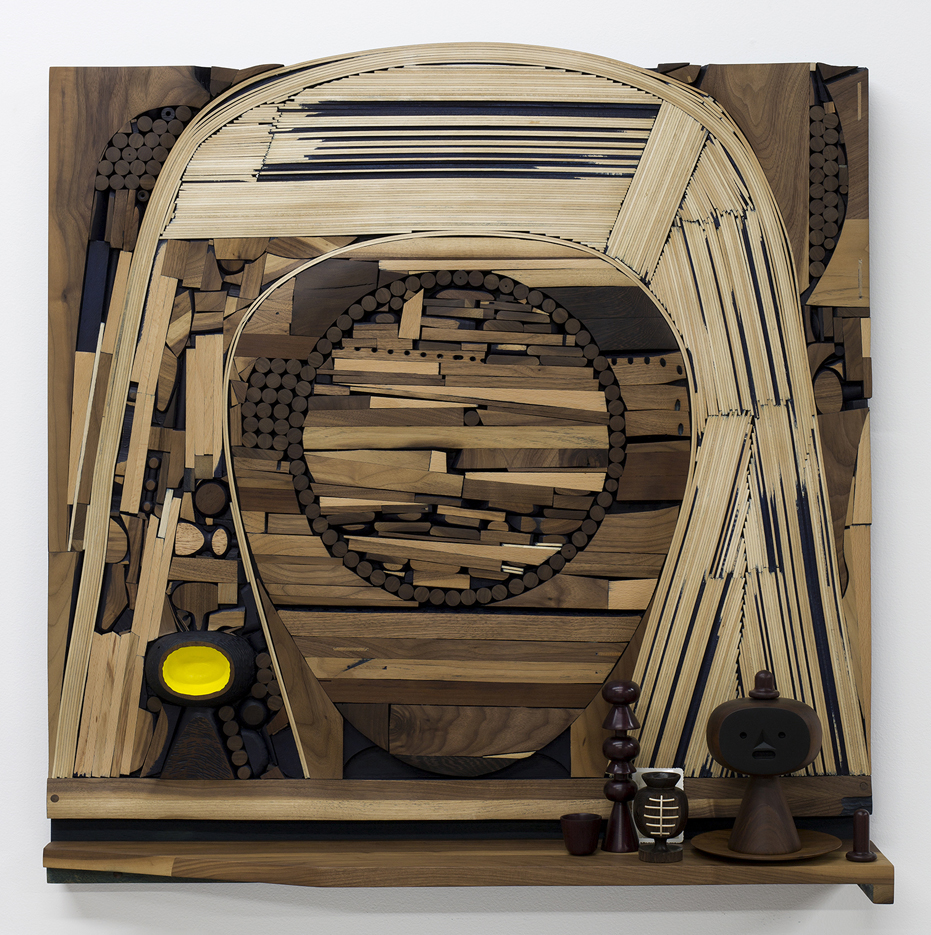 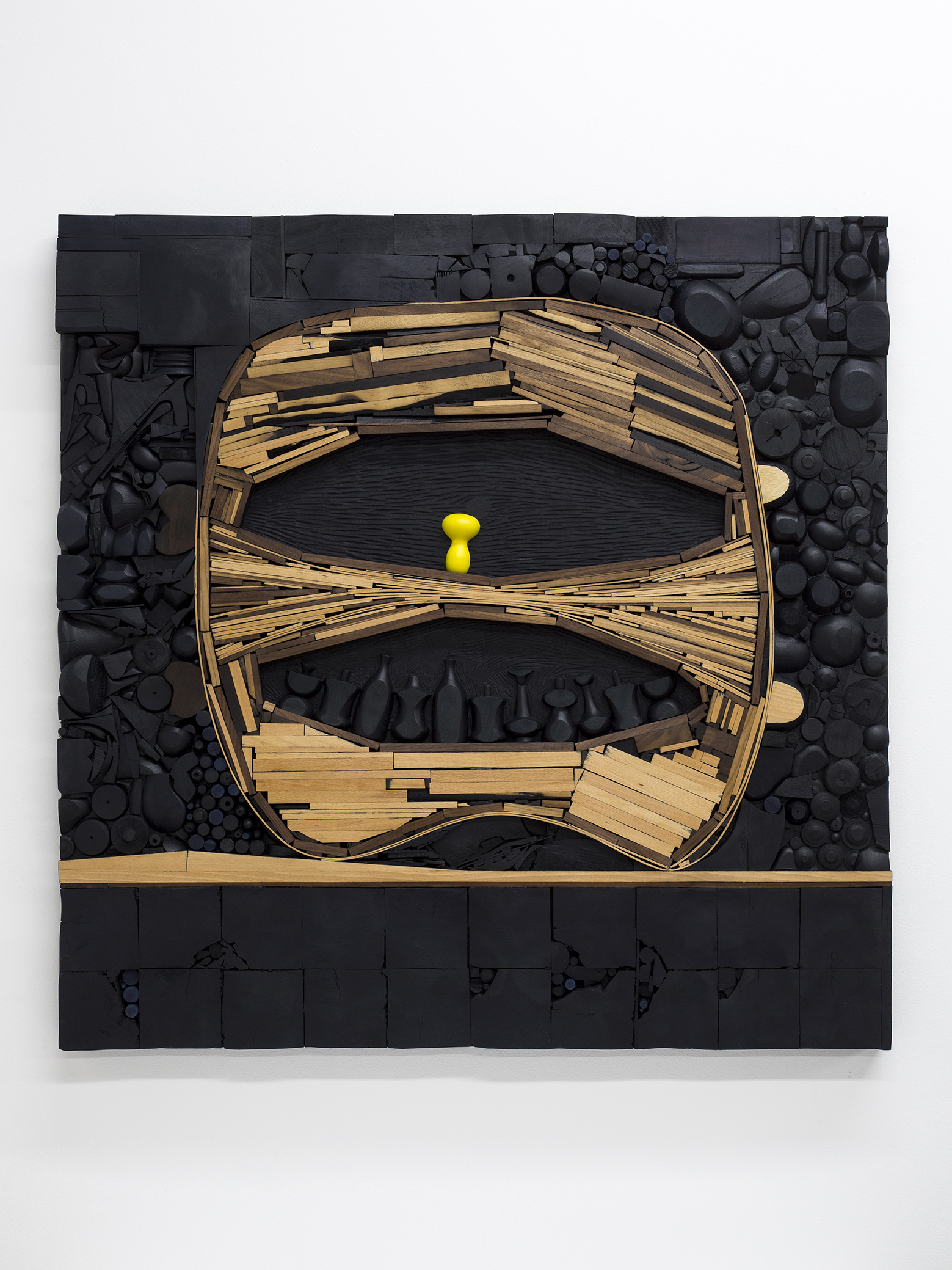 Wood and acrylic paint on MDF 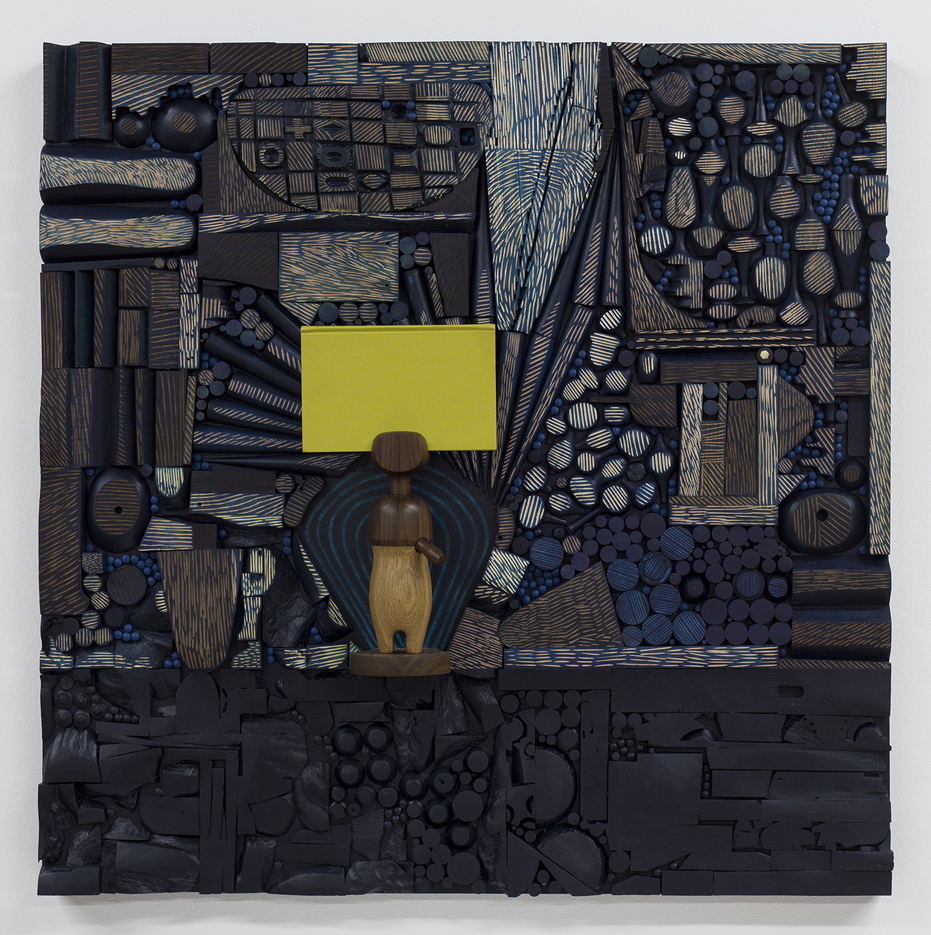 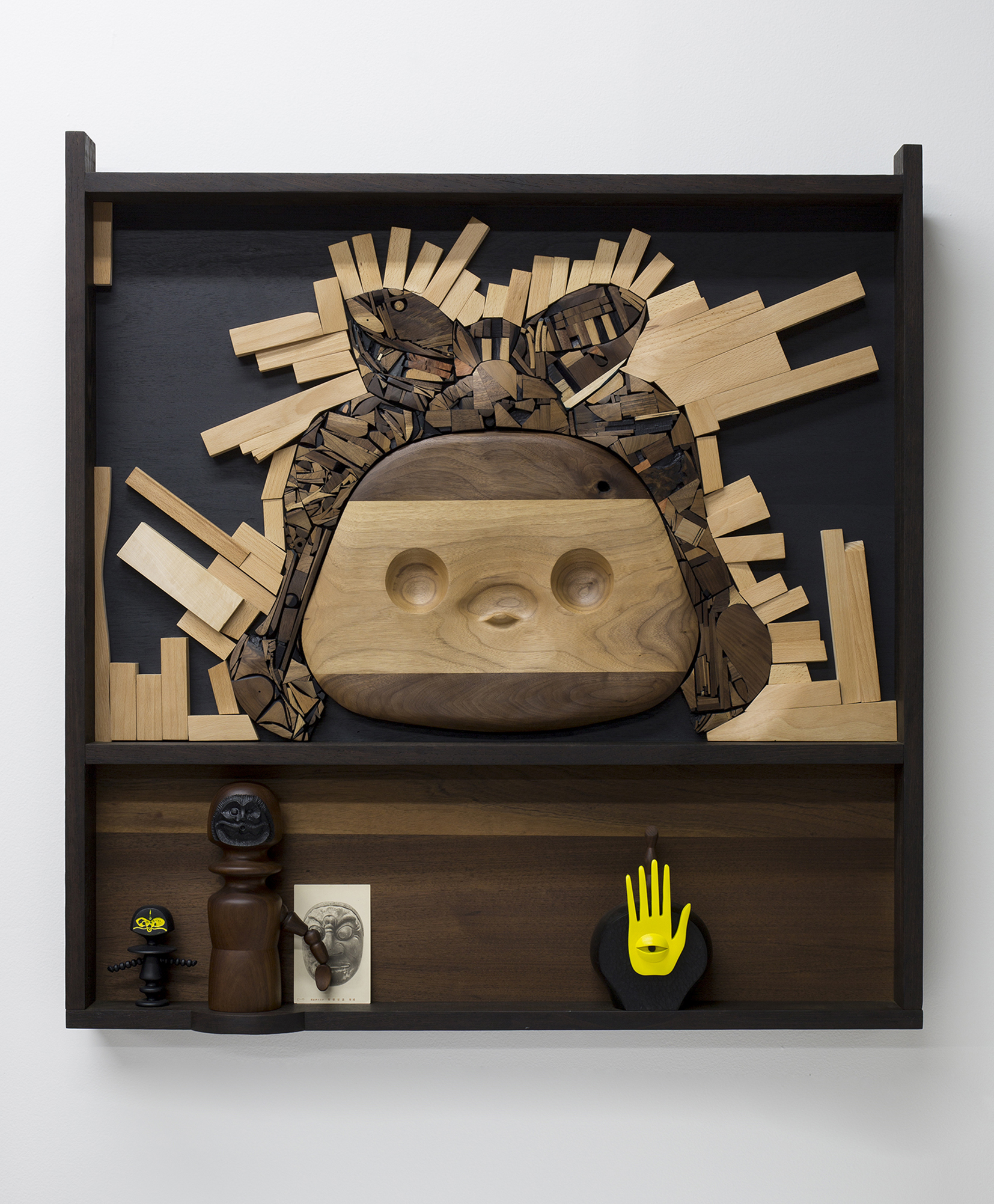 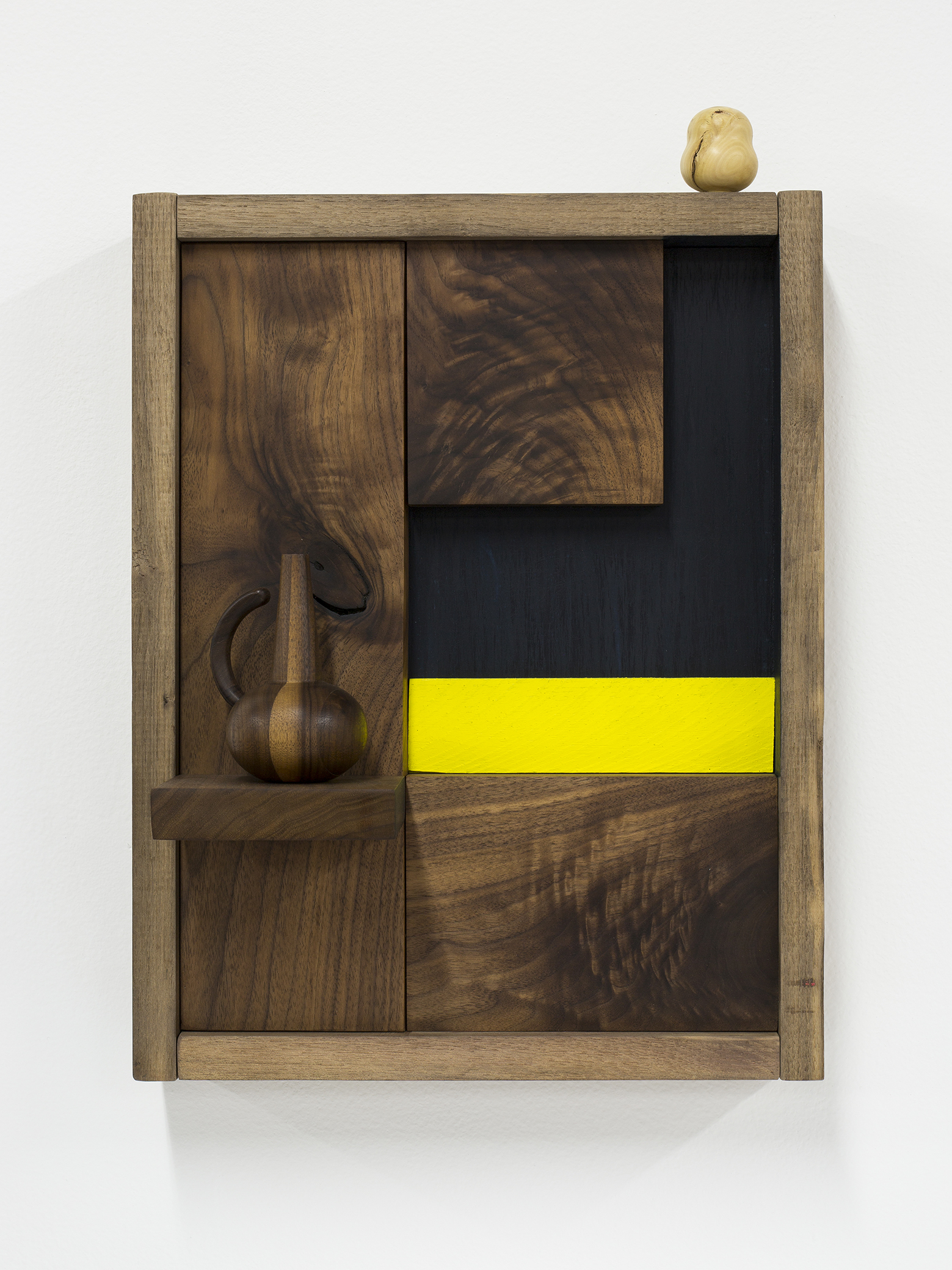 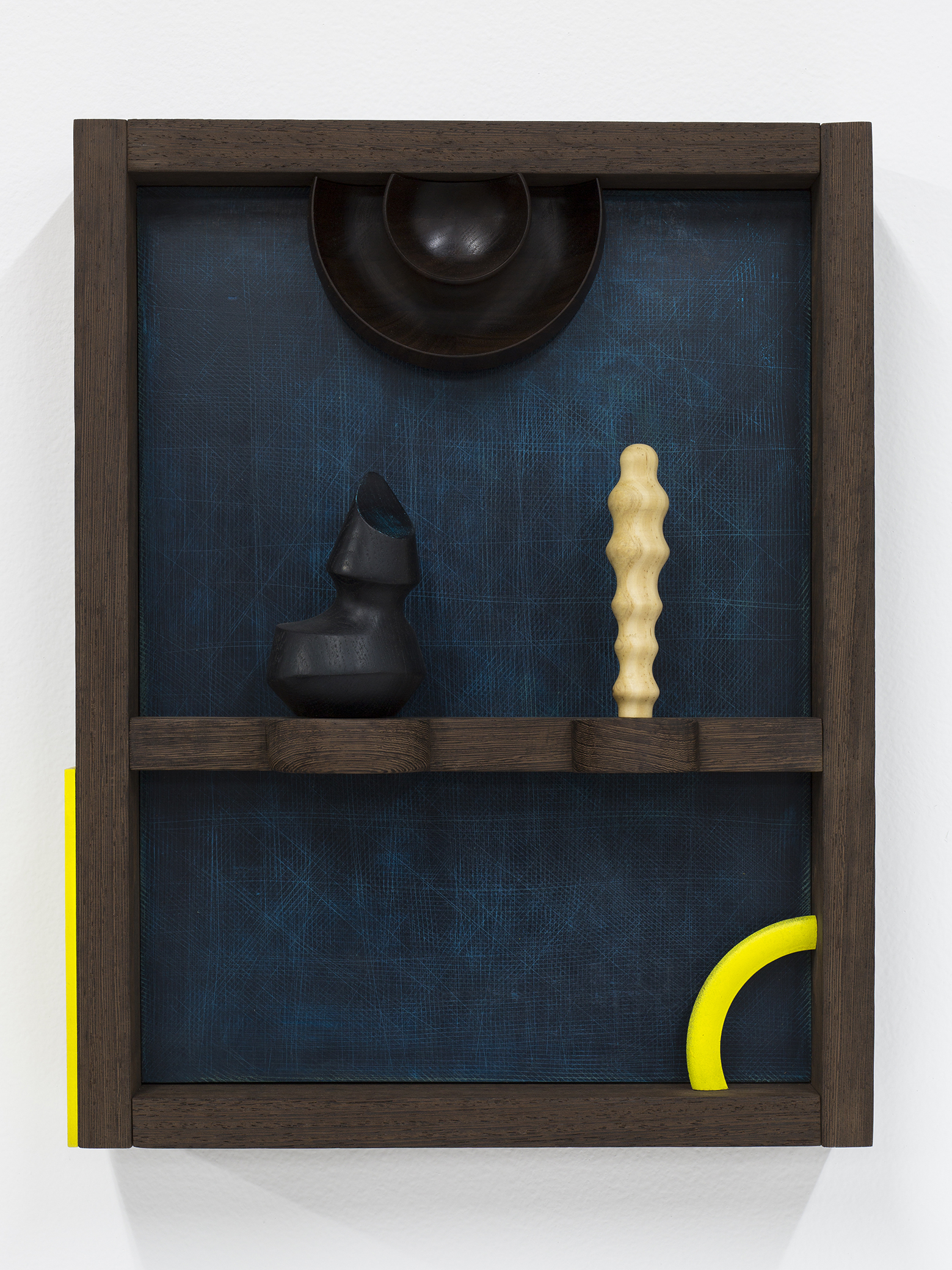 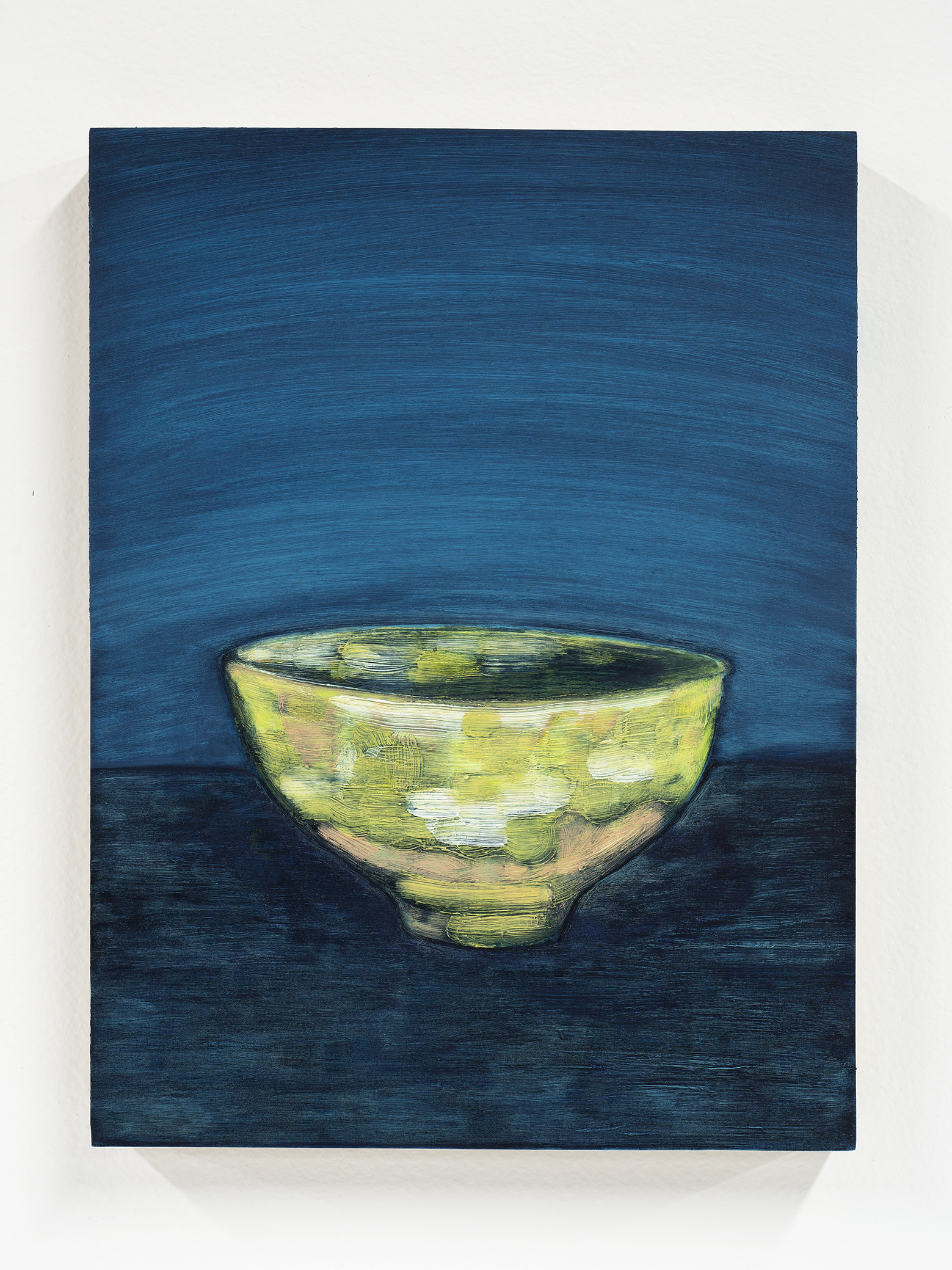 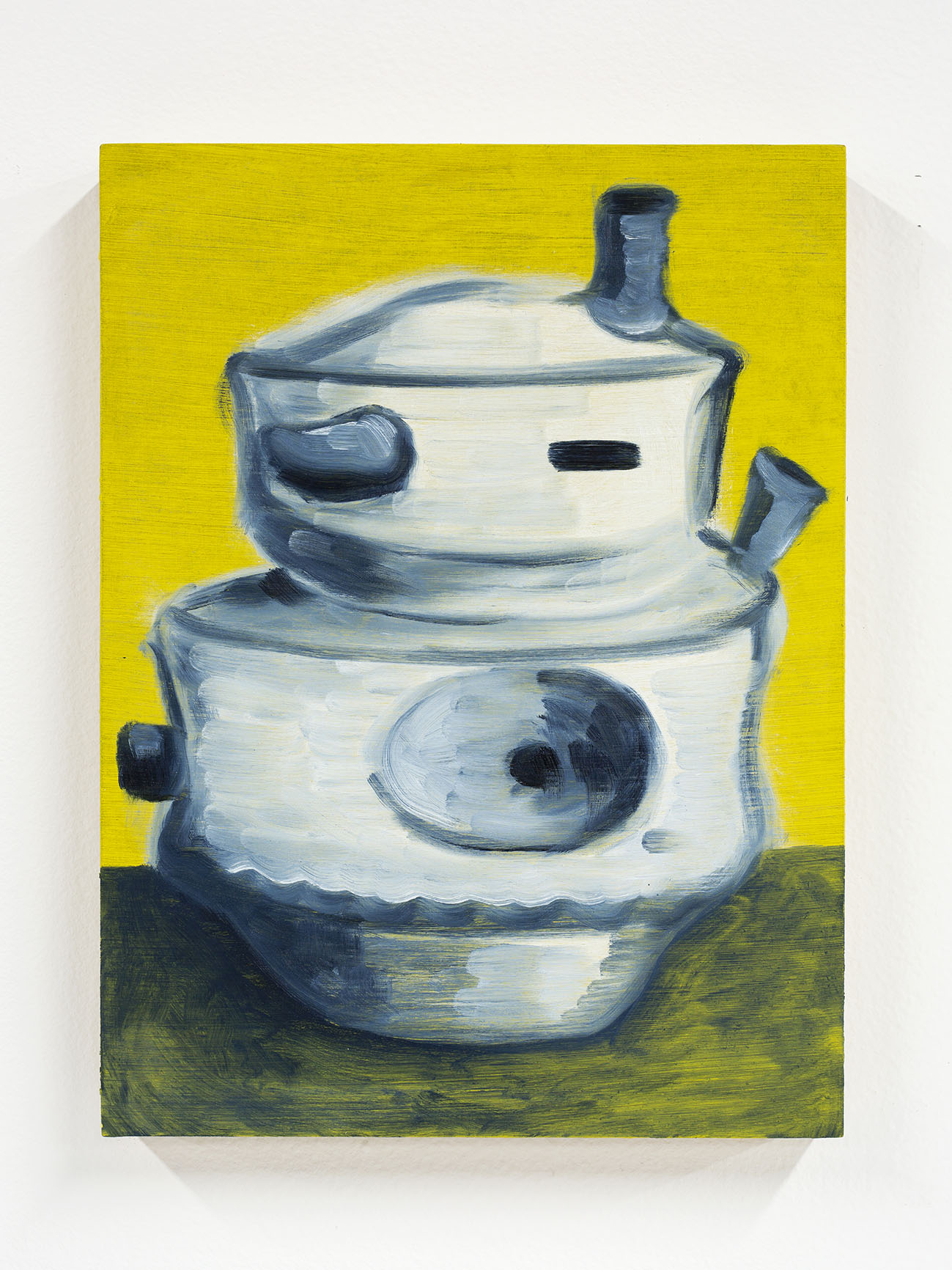 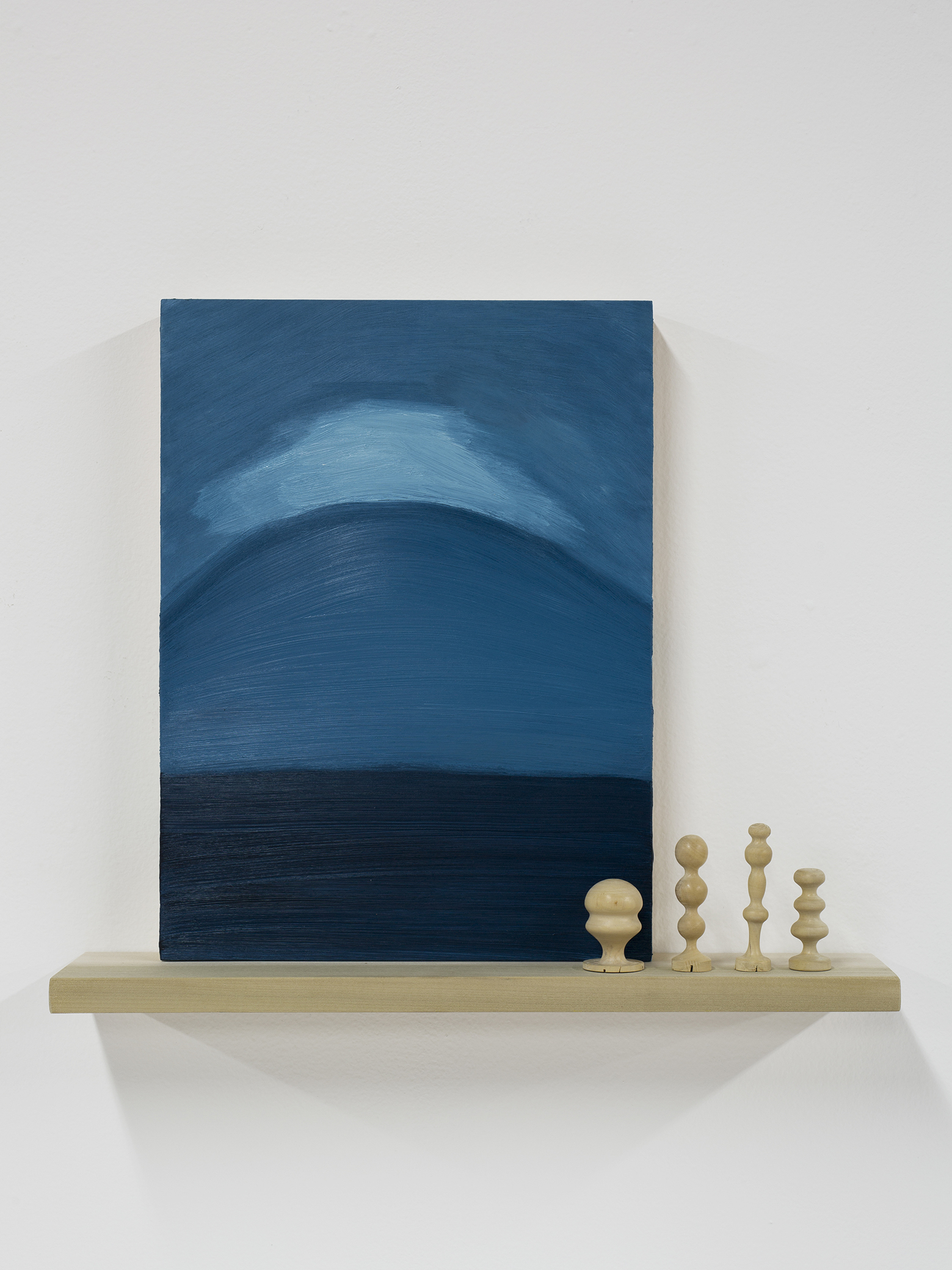 Oil on canvas and wood (Birch and coffee) 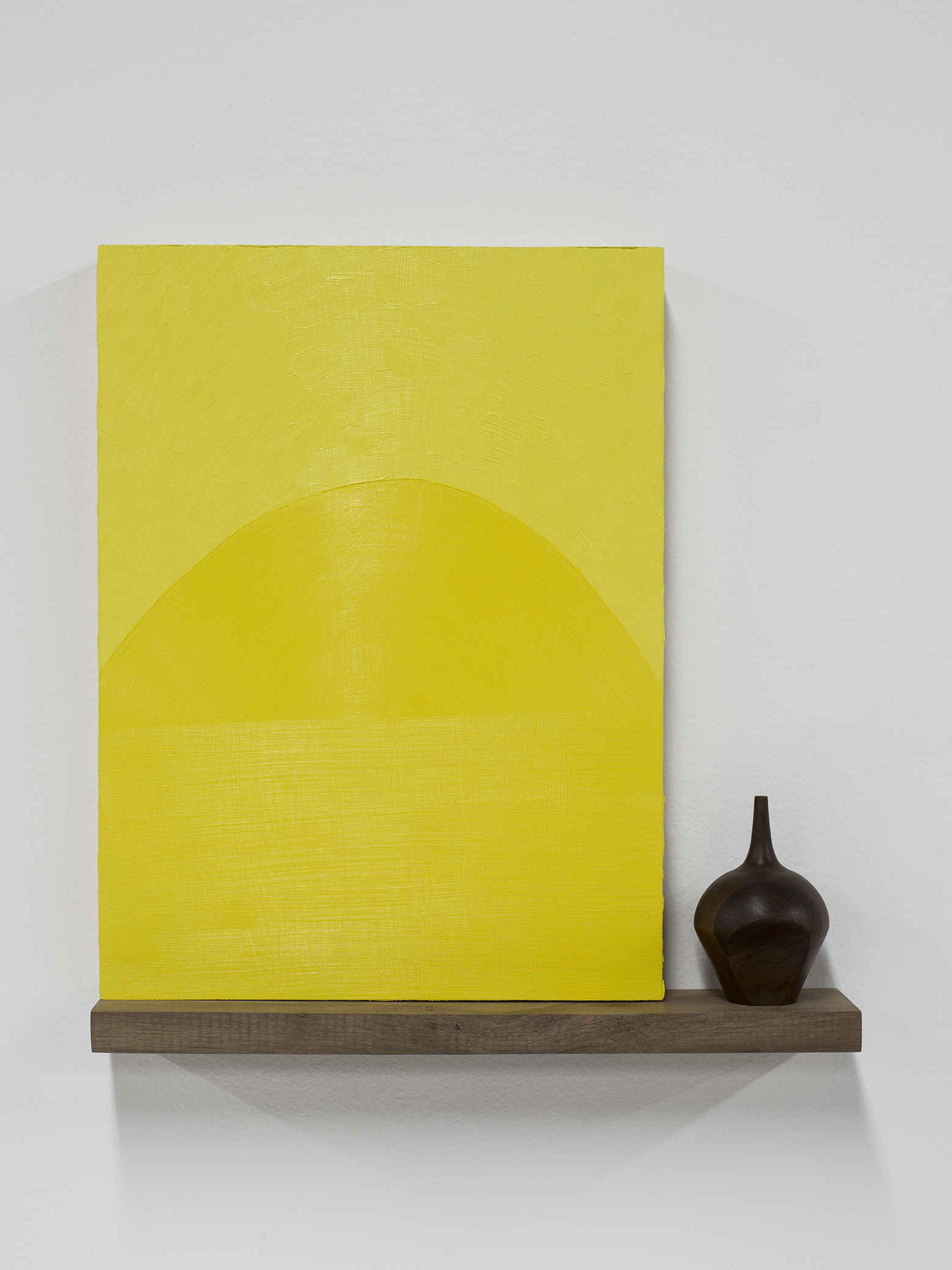